Breaking down your own competency


There are some things you just wish you knew sooner. About fifteen years into my career, a prolific commercial real estate broker I was engaged with for a project broke down the Four Stages of Competence. To this day, I still remember it. Though it helped that he was a great storyteller to make me remember; however, when I look back the concept still needed a few years to simmer in my head until I fully grasped it. Sometimes heavy concepts are like that, you don’t always get it right away. For me, as a Headhunter, these four stages are always lurking in the back of my head when I’m assessing candidates, roles, companies, and hiring managers for a great fit. Competency matters. Here is a snapshot of what the Four Stages of Competence look like:

I’ve been blessed to be a father of three terrific kids that also happen to play sports. By accident, I became a soccer coach about five years ago out of desperation for about fifteen fourth-grade girls playing in a fifth/sixth-grade CYO league. A message went out from the athletic director that there would be no soccer team if a parent did not step up to coach and I raised my hand.

Year one, otherwise known as stage one. As fourth graders, we stunk against bigger, faster, stronger girls and lost every game besides a 0-0 tie in year one. In year two, as fifth graders, we won every single game starting off the season in stage two, and ending in stage three with a perfect record. In year two, we were fifth graders playing against bigger and stronger sixth graders but we really had to focus in order not to make mistakes. As sixth graders in year three, we had reached stage four in just a few weeks into the season. We played with high confidence and expected to win every single game as we were bigger, faster, and stronger and we knew we had gotten better every year. 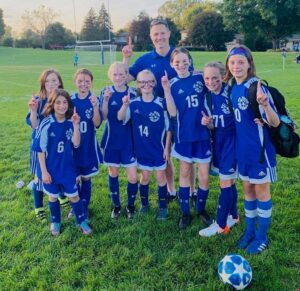 Consider this personally and ask yourself – where am I in this progression? And as a heads up, this process starts over every single time you get promoted and is especially apparent to me from my days in public accounting. More specifically, in medium to large CPA firms where a brand new Staff Accountant becomes a Senior Accountant that goes onto becomes a Manager that maybe becomes a Senior Manager, they will go through this metamorphosis three or four separate times . . . if they are determined and competent enough to do so.