Milestone: Today we fired a client for the first time

Today is a watershed day for The Headhunters. We fired a client. Since our inception in late 2019, The Headhunters has always taken a “Yes” first approach. In the infancy stages of organizing this business, I came up with a simple mantra of “Anything for Money” or AFM. AFM was sort of a joke, but not really a joke for this hungry and brand spanking new company that did not have one single client. AFM was meant to be the short-term bridge that carried us to work toward higher level work we wanted to be doing. As a start-up we did not have the luxury of turning our noses at work our clients asked us to perform. We proudly ate the dog food people gave us. Sure, we did turn down searches for roles that made little sense; finding low skilled workers, placements with  odd compensation structures or companies with super high turnover, etc. But I also discovered that we were crushing searches for some really difficult needs our clients had: for hard-to-find engineers, cannabis cultivation leaders, territory sales managers, and supply chain specialists from entry through executive level. We filled searches with salaries from $40k to north of $300k.

The Secret Sauce and the Dummy Curve

I’m not sure I can point to just one thing on why we’ve been successful. It probably starts with being hungry and doing work that other recruiting firms would turn down. I have to give some credit to a friend that gave me some advice early on. In mid-2020, during the h 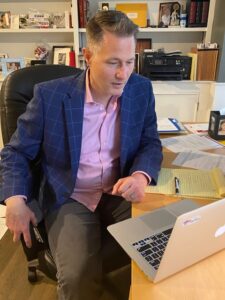 eight of Covid-19 lockdowns I reached out to Bob Michalak to check in and share what The Headhunters was working on. We were working on a crazy diverse set of roles, including temporary staffing, that Bob would mostly never touch. In that meeting, Bob introduced me to “the dummy curve.” Basically, Bob said, “you don’t know what is going to work so you just keep trying things.” Experienced recruiters understood from years in the business (that we didn’t have yet) to not to waste their time on low-probability searches. We do now know, but I still don’t care much.

Jerry Rice said it best, “Today I will do what others won’t, so tomorrow I can accomplish what others can’t.”

So, Why Was The Client Fired?

This client was difficult. The hiring manager admitted, “I am a d**k.” He was not as bad as he said he was but he certainly was not all rainbows and unicorns either.

I truly like the guy, and I think he is smart as hell along with being insightful. But still, it wasn’t going to work. This client was fired a couple of reasons:

I was not even mad. I simply said, “I am cutting my losses, and we are moving on to focus on other work.” I can happily say the truth is we are super busy right now, and we need to focus on the clients we can help.