Was your resume overlooked? These two reasons could be why

Most people do not have perfect career paths or resumes- after all, we’re all human. Many people change careers all together, have faced layoff situations, been poorly fit into an organization, or changed companies in order to push forward in their career. In eight years of recruiting, I have found the two biggest reasons a candidate’s resume gets overlooked, cutting off the hiring process before it really even starts.  Read on to find out the fine line between a job hopper and a stagnant employee and learn why walking that line is your best bet for career growth.

The first reason your resume could have been overlooked is if it’s filled with too many stops. If you are 10 years into your career and your resume has more than four companies (and similar roles/responsibilities), there is an immediate concern that you could be a flight risk when the going gets tough, or worse, that you are a below average performer. The only way to confirm otherwise is to do reference checks with all of your previous managers. Frankly, that’s a lot of work and with a stack of resumes on most hiring managers’ desks, they likely won’t want to sign up for that arduous task. Ask yourself: do you keep up with your prior managers to allow for strong references? 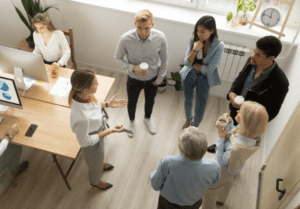 When working with a recruiter it can be easier to walk through the “why” in each stop on your resume. But if your job search is one you’re going at alone, and you don’t have a recruiter there to communicate the details of your career and advocate for you to progress in the hiring process, this can be very difficult to explain on your resume.  The more stops, the more explanation needed and the more likely you will be overlooked compared to a competing candidate without the career blemishes.

The jury is out on which is worse: the job hopper or the stagnant employee. My advice? Don’t be either.

When a candidate has held a single position for more than six years without a promotion or a company change, the first thought is why? The second thought is, generally, that this person may not adapt well to their new environment.

This second reason your resume could have been overlooked is that after so many years of doing the same role in the same atmosphere, a person begins to become institutionalized. As recruiters we find that candidates that have been with one company for extended periods with limited growth during their tenure are not 100% on what they are looking for but want a change in their career.  This uncertainty and lack of diversity in their career shields them from truly understanding the environment and culture of the new role they are hoping to take on.  With a new environment and culture to acclimate too, coupled with learning a new system and processes, it can create a negative situation with resistance to change and a recipe for failure.

People understand resume gaps and company changes during economical situations such as the recession or when COVID hit causing uncertainty with many companies and layoffs. If you are looking for career growth and to be viewed as a climber, each career move should be made strategically and with career advancement in mind.

Let’s not forget the flip side, which is staying too long with the same company without any career advancement. This situation indicates a stagnation that is typically not attractive to companies looking to recruit their next rock star employee.

Try to craft your career in a way where you walk the line in the middle, with strategic career advancement in mind. And don’t forget to enjoy the ride.